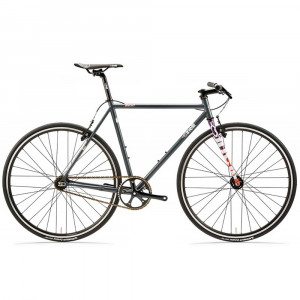 bikes and Frames City Bikes Cinelli Tutto. The Tutto is Cinellis latest, most detailed and sophisticated urban track bike ever. As the name implies it has been designed to do everything a rider might want to do on a track bike in a 21st century megacity. Thanks to its wealth of subtle, obsessive, design details the Tutto is able to effortlessly morph from messenger work bike with front racks to crit racer to single speed cyclo cross machine to indestructible belt-drive commuter according to the desires of its rider.The Tuttos geometry reflects its hybrid functionality: true track angles but with clearance sufficient for larger tyres, as does its proprietary segmented TIG-welded fork which improves rigidity as well as the aggressive street-ready aesthetic of the bike.Features:- Front rack middle fork eyelet - Front light hole - Belt drive optionSpecifications:- Sizes: S (52) - M (54) - L (56) - XL (59)- frame: COLUMBUS Cromor tubeset- headset: EC 34/28,6 | EC 34/30 - Seat Post:

Here are some other products related to Tutto

You can read more at Cyclingnews.com ...
>Read More

It was a day of firsts at the Vuelta a Espańa , Jesús Herrada (Cofidis) taking his debut success in a Grand Tour when he jumped clear of fellow breakaway Dylan Teuns (Bahrain-Merida) inside the final kilometre of the stage six finale on the Ares del Maestrat climb. Teuns, though, also pulled off a huge coup, moving into the red jersey thanks to Astanas decision not to defend Miguel Ángel Lópezs lead and, just as significantly, to the Belgians power on the final ascent, which saw off his main...
>Read More

Angel Madrazo (Burgos-BH) claimed a dramatic victory on stage 5 of the Vuelta a Espańa when he forged clear of breakaway companions Jetse Bol (Burgos-BH) and José Herrada (Cofidis) in the final kilometre of the Alto de Javalambre. A little further down the road, the first summit finish of the Vuelta saw Miguel Angel Lopez (Astana) move back into the overall lead thanks to his forceful attack with 3km remaining. The Colombian ripped clear of a fragmenting group of favourites to place 4...
>Read More

Fabio Jakobsen ( Deceuninck-QuickStep ) won stage 4 of the Vuelta a Espańa , triumphing in the second bunch sprint of the race in El Puig. The Dutch champion edged out stage 2 winner Sam Bennett (Bora-Hansgrohe) by millimetres on the line. Max Walscheid (Team Sunweb) was third across the line, but was later relegated to the back of the peloton after the race jury reviewed the sprint. Fernando Gaviria (UAE Team Emirates) was awarded third place, though his teammate Juan Sebastian Molano was ...
>Read More

Sam Bennett (Bora-Hansgrohe) claimed victory on stage 3 of the Vuelta a Espana, beating Edward Theuns (Trek-Segafredo) and Luka Mezgec (Mitchelton-Scott) in a bunch sprint in Alicante. The Irish champion, who won three stages of the recent BinckBank Tour, collected his 12th win of the season with a convincing sprint in his first Grand Tour of 2019, after missing out on selection for the Giro dItalia. He latched onto Theuns wheel as Trek took over from Sunweb in the home straight, and put c...
>Read More

Chloe Dygert-Owen ( Sho-Air Twenty20 ) soloed to her fourth straight stage at the Colorado Classics to make it a clean sweep for the week and seal the final overall title. The American rider made it four-from-four with a decisive attack with 5km to go to leave her breakaway companion Janelle Cole (LUX-Flexential) and take a memorable win. As well as the four stage wins, and the GC, Dygert-Owen won every jersey going at the event. Cole hung on to take a well-deserved second place on th...
>Read More

Nairo Quintana (Movistar) laid down a huge marker on stage 2 of the Vuelta a Espana with a fine solo stage win in Calpe. The Movistar leader attacked with just over 3km to go from an elite group of six and held off a late charge to win ahead of Nicholas Roche (Team Sunweb) and Primoz Roglic (Jumbo Visma). The six-man group formed with around 20km remaining on a stage that many predicted would end in a bunch sprint. The key move was sparked by a joint attack from Roche and Mikel Nieve (Mitche...
>Read More